David Foster Wallace has received such deserved praise as “genius” and “the most important writer of his generation.” He and his work have been the subject of several books, and an assortment of critics, scholars, and journalists have spilled ink and dedicated digital pixels to scrutinizing, analyzing, and criticizing his work. Given the abundance of attention that the late writer regularly receives, I am often surprised that many people seem to miss one of the most important points of his work.

Wallace’s nonfiction taught me a new way to write about experience – a way that is vibrant, alive, and personable, but also intellectually tough, complicated, and brave. He also showed me how to be funny without being silly, and without being insulting.

Years after reading Consider The Lobster, I’ve devoured all of his work – fiction and nonfiction alike – including the massive masterpiece Infinite Jest. His nonfiction, however, is the subject of my new essay at the Daily Beast. Focusing on his soon-to-be-released collection of essays, Both Flesh and Not, I purport the original theory that Wallace was a traditionalist in postmodern drag. He donned the costume of a postmodernist to gain entry into a world of liberal, sophisticated urbanites, and once inside the club, he distributed his traditionalist message of limits, loyalty to place, and elevation of human scale community. He prioritized spiritual values above marketplace principles, and he opposed the detached irony, libertine lifestyle, and secular cynicism of much of his generation. His nonfiction provided revelatory clues into the mysteries of his fiction. Realizing that his nonfiction bears philosophical resemblance to Christopher Lasch, Jimmy Carter, and G.K. Chesterton makes it much easier to understand why, for example, the hero of his last novel The Pale King is a Jesuit Priest who teaches tax law at Depaul University.

My essay is highly compromised. The original draft was about twice the length, but I am glad that I had the opportunity to promulgate my theory for an outlet as widely read and widely watched as the Daily Beast.

Many critics seem to deliberately miss what Wallace was saying by myopically focusing on how he was saying it. This is why so many reviewers were obsessed with Wallace as a humorist. It’s easier to laugh at the jokes – and the jokes were great – than to wrestle with the meaning.

In two essays, the first for PopMatters and now the second for the Daily Beast, I’ve tried to wrestle with the meaning of Wallace’s work. It is a challenge that is intimidating and threatening, but deeply important.

Today the Daily Beast is allowing me to force my tastes on the masses. I’ve written an annotated list of my top ten books for the Presidential election season. The list includes three of my favorite authors – Norman Mailer, David Foster Wallace, and Gore Vidal, who I recently eulogized for PopMatters.

One of the reasons I enjoy writing about pop culture and literature is that it enables me to introduce unpopular political or philosophical ideas into mainstream discussion.

The overarching theme of my Daily Beast article, and the dominant theme of all the books I’ve chosen for inclusion, is that Presidential politics is a ghastly and fraudulent spectacle of stagecraft in which personality dramas, public relations, and image branding silence and defeat discussion of the issues most important to the lives of the American people. It is often difficult to enter such an unforgiving critique into political debate, but with the usher of pop culture and/or literature, it can happen.

The main reason I’ve selected all of the books on the list, however, is that they are valuable and insightful works of art or research that elevate their respective genres to new standards of excellence. Everyone, regardless of ideology or level of political passion, could benefit from reading great books. 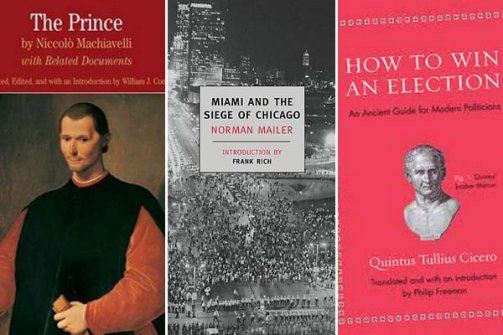