I was a 13 year old boy when I discovered the music of John Mellencamp. His songs were my usher into the world of writing, art, and creativity. A continual source of powerful inspiration in my work and life, I wrote my second book, Mellencamp: American Troubadour, about his music, and the ideas that surround it. The impact and influence of Mellencamp’s music on my life is so large that, without it, it is impossible to conceive of myself.

On Memorial Day, I had the incredible thrill and honor of driving to Nashville, Indiana to visit John Mellencamp in his recording studio. We sat for a long, fascinating, and fun conversation in the same room where he and his band have made so many of my favorite songs since 1983. Then, I watched he and the band rehearse for their upcoming tour, playing “Pink Houses” and “Paper in Fire.” To add to the pleasure and amazement of the experience, I also met the beautiful and soulful Carlene Carter, and had the opportunity to have a discussion with her.

Mellencamp’s first words to me were, “It is a good book.” That simple, but profound compliment is one I will always treasure (He was referring to my work of biography and cultural criticism, Mellencamp: American Troubadour).

Read the essay I wrote on the experience at Salon.

Here is an amusing exchange from our conversation that did not make my essay: After Mellencamp explained that audiences have jeered and heckled him several times throughout his career, he added that, “not once has anyone said anything derogatory to my face.”

“Really, why do you think that is?” I asked.

“Because they know they type of person that I am. Would you say anything?”

Mellencamp laughed. “Well, I’m an old man now. So, you could probably kick my ass. Fifteen years ago, you would have kept your mouth shut.”

There is a new sensation in contemporary music. He has arrived in the atmosphere like a full force gale with a sound and fury that is impossible to ignore. His name is Marcus King, and he has assembled a skillful and soulful group of musicians for The Marcus King Band. They move through styles without obedience to categorical regulation of genre; playing with the technical mastery and heartfelt avidity that makes great music great music. His kind has not emerged onto the airwaves for many years.

In the late 1960s and early ’70s, music went through an exciting and eclectic period of innovation and variety. The transgression of borders visible and palpable in political and social upheaval underwent artistic emulation in various genres of popular music. The barriers separating these genres began to break. Fusion was the result…

Read the entire essay at No Depression to find out about one of America’s most exciting new bands, The Marcus King Band, and how they fit into the rarefied ranks of Gov’t Mule and The Tedeschi Trucks Band.

Recently, for No Depression, I wrote a review of a newly released box set compiling Elvis Presley’s masterful final recordings in the famous Jungle Room of Graceland. Read the essay for my take on Elvis’ unique gifts, his late in life musical accomplishment, and his development of the genre, rhythm and country.

Shortly after reviewing Elvis, I reviewed a Bruce Springsteen and The E Street Band concert at the United Center in Chicago, and used the performance as an opportunity to reflect on the power and importance of hope. Read it at Salon. 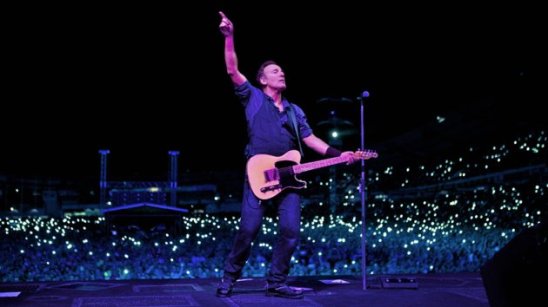 Finally, I crown Gov’t Mule the “best band in the world,” after watching them perform a single set in Rosemont, Illinois. Read my explanation for how Mule surpasses everyone else in the genre, and elevates rock ‘n’ roll to art at No Depression.

One of the most talented, moving, and inspirational singers in American music is the phenomenal Ruthie Foster. More than nearly any other contemporary American singer, she expresses, exercises, and exemplifies what Craig Werner calls the “gospel impulse.” In my new essay for Splice Today, I write about the importance of Ruthie Foster’s music, and the deficit American culture suffers for not giving her a bigger platform to share with the world her unique and powerful voice and vision. Read it here. Ruthie Foster’s new single, “Singing The Blues.”